Those who walked in darkness have seen a radiant light shining upon them. They once lived in the shadows of death, but now a glorious light has dawned. Lord, you have multiplied the nation and given them overwhelming joy! They are ecstatic in your presence and rejoice like those who bring in a great harvest, and those who divide up the spoils of victory. Isaiah 9:2-3

This Christmas was unlike any other I have had since I met Jesus eight years ago. I had my wedding on the seventh then flew away to my honeymoon, the whole time delving into various advent devotions, feeling really saturated in the love of Jesus and spirit of Christmas but kind of separated from everything else. Upon returning to my beloved community, with a grateful heart, and feeling super blessed to be back, I went to our church wide Christmas party and really just had the best time seeing everybody enjoying one another’s friendships. We sang Christmas songs and just laughed and had a great time together. I mean how could we not with “weird uncle Frank” and “Cruella De Ville” in our company? I remember thinking how blessed I felt to live such a simple and joyful life with Jesus and His people.

As the night was winding down I got in my car to leave and as I was driving out of the parking lot I caught a glimpse of a girl standing by the fence in the dark and as I passed her by the Lord clearly told me “go back”. Without hesitation, I put on the brakes, put the car in reverse and backed up to where she was standing. I then asked her if she was ok and if she needed a ride. She said she did and that she lived across the street. I then invited her to church upon which she replied that she didn’t have any clothes. I helped her put her bags in the car and reassured her that she was welcome to our church in any attire and proceeded to give her my phone number so that we could connect on Sunday morning so I could give her some clothes. As I headed across the street to drop her off I remembered that I had dropped my phone in the tub two days prior and didn’t have a phone for her to call me so I asked her if I could bring her inside to introduce her to Joy so that she could call her instead. She agreed.

When we entered the church she was weighted with shame and I could tell she was embarrassed. I introduced her to Joy and everyone else I could find. As each person approached her with smiles and hugs and genuine love I saw the weights begin to lift. I was suddenly overwhelmingly aware that I had been unknowingly drawn into the love song Jesus was singing over her life. I was awestruck as I watched Christmas unfold before me.

As she began to share her story she said she had always wanted to come to our church but she was told not to because we were a “laughing church”. I then replied with a laugh saying, “I struggled with severe mental illness and drug addiction for twenty-five years and Jesus set me free!!! You better believe I’m laughing!!! And I’m not the only one! We’re everywhere! We were lost and he saved us and put a new song in our mouths and we are rejoicing because we love Him and we are thankful!!!”. She then replied, “Wow, I never thought about it like that”.

The story ends with numbers exchanged and hope ignited. The rest is left in His beautiful hands. I don’t know exactly what will become of sweet Antoinette but I know the Lord is faithful and His plans for her are good and in that I am well satisfied, humbled, and thankful to Him for allowing me to be a part of His redemption song.

He gave me a poem to share her story. It is called “ 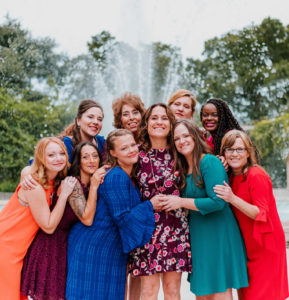 Standing in the shadows, broke and cloaked in shame.

How did I end up here? In this place so cold and dark?

There was a light once burning, but now there’s barely a spark.

There’s people all around me but I feel so far away.

Does anyone see me breaking as they go their merry way?

My hands full of bags too heavy, a call no one can hear;

If I move into the darkness maybe no one will see me here.

Then a voice breaks into the silence, “Hello, are you ok?”

My heavy bags are lifted and I’m led into the light.

There’s people all around me with words of hope and life.

I feel the darkness lifting, each smile a beam of grace;

There’s hugs and joy and my story’s heard,

There’s something happening in this place…

Oh God is that You calling?

Could this be where I belong?

Even in these tattered clothes?

Oh, I wanna sing their song!

A song of Christ exalted!

A song of love and grace!

A song of joy and laughter???

Oh, there’s something in this place…

GOD IS IN THIS PLACE!