Heather was set free from Addiction

My life has been full of trauma and pain. I was so lost, mean, angry, and full of hate. I was sick and dying both physically and spiritually. I lived amongst the tombs. Literally! I was homeless, sleeping in the cemetery at one point! I suffered many serious traumas and was messed up from all of it. I did drugs so that I wouldn’t have to deal, but all I wanted was to die. But the Lord stepped in, kicked down my door, and dragged me out of despair! Lately, the Lord has been speaking to me on the importance of what He’s been doing in my life. The amazing part of my testimony is that even though I was a horrible person, living in bondage to sin, anger, pain, and hatred, that’s not who I am anymore! That suffering girl no longer exists! She’s left behind in the tombs!  I never had a clue who I was. I searched for my identity in every shadow, which would pass just as quickly as it came. I was terrified of being alone, but then the Lord showed me that I’ve never been alone and never will be! I was afraid of failure, but then the Lord told me that I’ll never fail, because Jesus never fails AND JESUS LIVES INSIDE OF ME!

I thought I was broken, but the Lord showed me that He works all things together for my good because I love Him! I was so afraid of rejection, but then God told me that even if it’s not what I want it to look like, He has a plan to prosper me, not to harm me. I was terrified that I would never be good enough, but then God showed me that it’s HIS APPROVAL THAT MATTERS, NOT THE APPROVAL O 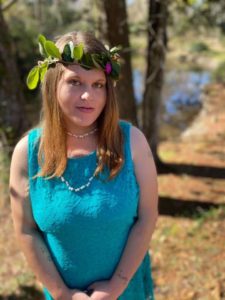 F MAN! MAN FADES AWAY BUT THE SPIRIT OF THE LIVING GOD IS ETERNAL AND HE LOVES AND CARES FOR ME! I’ve been growing so much in my trust for Him. I had such a hard time accepting His love, and He wooed me with tender love and mercy. Jesus literally gives me flowers! My bible is full of flowers that He has given me. The only flowers I’ve ever expected to receive were going to be on my grave! My whole life I was alive but totally dead inside. Now my spirit is BLAZING AND ON FIRE, BURNING WITH PASSION FOR MY BELOVED KING! CALLED OUT AND SANCTIFIED BY MY SWEET SAVIOR WHO CALLED ME OUT OF THE PIT BY NOTHING I COULD HAVE EVER DONE AND SHOWERS ME WITH HIS RADIANT LOVE EVERY MOMENT OF EVERY DAY! Even in my toughest moments, He loves and forgives me! That’s what a great, gracious, tender, loving, merciful lover He is! I am a new creation in Christ; the old has passed away and behold, He is doing a new thing! I am my Beloved’s, and He is mine and nothing, not height, nor depth, nor width can separate me from the love of Christ!