Finding freedom in a world of addiction 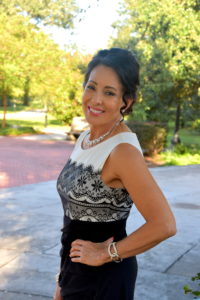 My name is Dale and I was “made in Japan.” I was born at a military base in Tokyo to a New Yorker Father and a Japanese mother. When I was young, we moved to Alabama – “The Bible Belt”, after my father took a job with NASA during the “Space Race” to put a man on the moon. I never quite fit in in that little southern Baptist town.

Later, I attended College at Auburn and pursued a degree in business. After I graduated, I moved to Louisiana to take a job in the medical industry. As a medical saleswomen, I was exposed large corporate social settings that included entertaining and lots of social drinking. My job was to wine and dine with the medical community. I began to drink excessively and started to lose control. I almost lost my job due to my behavior. As a result, I started attending Alcoholics Anonymous and quit drinking. I was sober for 20+ years.
I met my husband at an AA meeting in 1993 and we got married shortly after. He had 3 children and I had a daughter. My husband and I were very instrumental in establishing AA meetings in various locations on the Northshore. We helped other couples to find sobriety through the 12-step program.

After 12 years, my marriage ended in divorce. The divorce left me depressed and isolated and after 20 years of sobriety, I relapsed. All my years of AA did not adequately prepare me for this loss. Divorce divided my children and our home was completely fractured. I later lost my job and my finances suffered greatly. I blamed God. I was angry and alone. Five years of drinking and trying to maintain on anti-depressants, had taken a toll on me. Finally, I cried out to God to help me. “Please God, help me!”

My neighbor had reached out to me and invited me to a Bible Study several time. Embarrassed at my situation, I avoided accepting the invitation. But finally I broke and decided to go with her. That day she was heading to church. At the service, I met the staff of Mary’s Song and learned about the program. I decided to trust God and check in to Mary’s Song. I walked in to the doors of Mary’s Song carrying only a suitcase. I felt the warmth and love of the staff and women but there were many challenges I had to face. Daunted, I left after 3 months. After leaving, it wasn’t long until I was back in the same dark place I had left. God continued to call me back to the place of change and healing. I surrendered and returned.

I have been here for 9 1⁄2 months. During the last several months, I have let the Lord into the empty rooms of my heart. By His redemption, He has torn down the cob webs, opened windows, and shined his light into my soul. A 12- step program will get you sober but it cannot save your soul or set you free! Jesus is my Savior, Healer, Deliverer. He saved me from myself and by His intercession to the Father, I am healed! He has transformed my heart with a capacity to love and forgive beyond anything I have ever imagined possible.

It’s one thing to believe when circumstances are going your way, but is altogether something different when you’re struggling to get through the next day. Now I have placed my feet upon God as my rock and I know His grace is sufficient to get me through the toughest of times. 2 Cor. 12:9 says “my grace is sufficient for you, for power is perfected in weakness. I would rather tell of my weaknesses so that the power Christ may dwell in me.” Even though times of trial and tribulation can be frightfully painful, I’ve learned to be grateful for life’s storms. Today I see it as an opportunity to go deeper with God, He will strengthen my faith so I can minister to others and serve Him.